Can I Sue an Insurance Company? 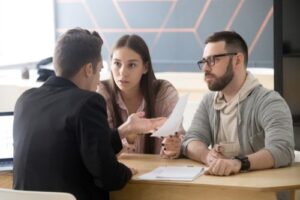 When an insurance company fails to provide financial protection to a policyholder after an unplanned event or accident, it may be a case of insurance bad faith. Individuals pay into their insurance policies with the understanding that when such a situation occurs, they will be able to recoup some of their financial damages. An insurance company must be able to provide the person with a valid reason for denying a claim, and when they can’t, they may be acting in bad faith.

How Can a Policyholder Know If Their Insurance Company Acted in Bad Faith?

Every claim is unique, and the details of the situation dictate the necessary elements for a bad faith claim. In many cases, bad faith claims are based on the insurance company reasonably processing a claim, which may include:

In situations such as car accidents, in which there is another party involved, an insurance company may show bad faith in the way they fail to represent the best financial interests of the policyholder. When one individual files a claim against another for their injuries, the insurance company must defend the case with their client’s best interests in mind. In these cases, bad faith usually falls into one of three categories:

Can a Policyholder Sue Their Insurance Company in a Bad Faith Case?

If an insured individual’s insurance company rejects their claim, and they believe the company acted in bad faith, they may be entitled to file a lawsuit. Anyone considering this action should seek the counsel of an experienced attorney for advice and assistance in pursuing such a claim. In most situations, a person can proceed with a lawsuit on the basis of one or both of these scenarios:

How Do You File a Bad Faith Claim Against an Insurance Company?

For an individual to file a bad faith claim against their insurer, some of the paperwork, planning, and preparation they must do includes the following:

In the state of California, legislation for bad faith by insurance companies is included in the Fair Claims Settlement Practices Regulations. This contains statutes that explain precisely what is considered to be good conduct by insurance companies and what should take place to guarantee they are acting in good faith to the individuals they insure. Section 2695.7, more specifically, lays out what California law considers equitable, fair, and prompt settlements to be.

Seek Legal Counsel From a Firm With Experience

If you have filed a claim with your insurance company that has been denied, you may wonder if you have a case against them. The skilled team at Winthrop Law Group P.C. Attorneys at Law has the knowledge to walk you through the process and seek the best possible outcome. Visit our website today to find out how we can help.